Hi everyone and thanks for visiting our blog. My wife and I created this blog to chronicle our experience while raising a son with Asperger's syndrome. Since our son was diagnosed with an ASD at age 5, we've had a lot of questions. Lucky for us we have a great support network in place. And our blog gives us an opportunity to share what we've learned with our readers. We hope you find our blog informative and interesting. Thanks again for visiting.

Let me start off, by saying thank you to all past and present service men and women on this Remembrance Day.  Without your ongoing courage, none of us would have the freedom to rant about things on our blogs.

This Remembrance day has been somewhat different for us, when compared to ones previous.  This year was the first time that Jacob showed interest in the meaning of Remembrance Day.  And he was excited to learn that both of his great grandfathers served our country in WW2.  Mine as a field engineer, and his mothers in the Navy.  Both of whom came home when the war ended.

Naturally, we were both pleased at Jacob's desire to learn about not only his family's history, but his country's history as well.  But of course, we also knew that today would mean an extra long assembly, which we also know, can cause Jacob to lash out and eventually have a meltdown.

And of course, he did.

Jacob was very upset at having to spend the majority of his morning in an assembly, regardless of the reason or topic.  Naturally we tried to lessen his level of anxiety during lunch.  We explained the importance of today, plus the meaning of the poppy and a few other points of interest.  But nothing seemed to work.

Even as we went back to school from lunch. he was still upset, and struggling to let go of the hostility that he had from the morning.  But on a positive note, we ordered a set of Goosebumps books from Schoolastic, and they arrived in school today.  We had his EA and SERT hide them from him in order to maintain the surprise.

Now we have 1 gift for Jacob put away for Christmas, which is only (math in head) 42 days away?

But for now, we're still enjoying the day as it was meant to be enjoyed.  With family and friends while we give thanks to everyone in the military.

We just returned from trick or treating, and Jacob got so much candy that even I had trouble carrying his pillow case.  The good thing for us is that Jacob only eats the chocolate bars and chips, which means that there's lots of sugary junk for us.

But to be honest, we almost didn't go out at all this year, because Jacob doesn't like walking in the rain at all, even if there's tons of free candy to be had. He did eventually come around and put on his zombie costume.  We then all together, ventured out into the elements to go trick or treating.

After about an hour or so Jacob had enough and we quickly went home before it began to rain too heavy.  But after an hour, we were all soaked to the bone.  So after getting him changed, Jacob went into the kitchen for a drink, but only 2 goodies.  Not because we limited his intake, but because that's all he wanted.

So as Shannie finishes handing out our last candies, I'd like to take the time to wish everyone a safe and happy Halloween. 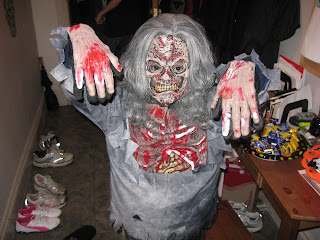 THE COLOURS OF AUTISM

Over the past few months, my wife and I, along with my son, have been having some in home assistance in order to help Jacob learn how to regulate his emotions.  The sessions have been going quite well and yesterday we had a major breakthrough.

We've been trying out a mad plan, that helps Jacob understand the difference between good and not so good behaviours when he becomes upset.  The plan has both words and pictures, and the poster is hanging up in our living room so that he can see it all the time.  It's been working quite well, but we felt that it could use some tweaking.

So yesterday, together we developed a colour scale to help Jacob understand his feelings.  They are as follows:

Then his ABA therapist asked Jacob if the colour Yellow could be used as a colour to describe things that help him feel good.  And Jacob felt that things like using electronics or reading could be described as the colour Yellow.

So the trick became that when Jacob was mad (red) or sad (blue), he could then use his yellow things to change his mood.  And since Jacob loves colours and understands how to change them by mixing other colours, he understood how they could essentially change his mood for the better.  We turned them into an equation.

We're in the process now of creating another visual chart with the colours on it, so that Jacob can use them as a guide when he begins to have certain feelings.  And it's already working, even without the visual aid.  Hopefully this will help Jacob regulate his emotions even more efficiently that he already does, which in turn, will improve his behaviour at school.

HAVING AN ASD IN OCTOBER

It's hard to believe it, but its already the first day of October.  And I'd like to say that both my son and I think that October is the best month of the year.  I have to admit that I'm biased because October has  a bunch of important days in it, including my anniversary and my birthday, as well as Thanksgiving for us Canadians, and of course Halloween.

Since about mid September, my son has been going on and on, about October and Halloween.  Even though it was about 6 weeks away when he first mentioned it, the anticipation that my son has, isn't rivalled by his birthday or even Christmas.  I think the idea of dressing up and being allowed to act a bit strange at home and at school, is something he really enjoys. And it's evident every day.

So when this morning came, my son barged into our bedroom, and insisted that I get up, and change all the calendars in our house to reflect the dawning of a new month.  And it didnt stop there.  He had a bit of a sore throat this morning, nothing serious, but enough that he was concerned that he wouldn't be able to, you guessed it, go out for Halloween.  His concern was so real that mom and I quickly told him that Halloween was weeks away, and that he'd be certainly better by then.

Then there's the constant talk about ghosts and monsters, which surprisingly, our son loves.  He also enjoys cackling like a witch and making scary noises like a ghost.  And he doesn't get scared, even if we watch a scary movie.

Of course there's the natural concern that us parents have, in regards to finding the right costume.  What does my son want to be this year for Halloween this year?  A zombie.  Luckily for us, we have a couple old accessories from when he was a zombie last year.  He might have outgrown the actual costume, but the gloves and mask are still in perfect condition.  We usually get our supplies and gear from Party City, which is a great store and has hundreds of costumes for both boys and girls.  So even if your child has an ASD, and wants to be a winged dinosaur, Party City will be able to help.

The only hard part i find about the upcoming Halloween season is....all the chocolate and goodies for sale in every store i go into.  And they're all perfect size for hiding them in my pockets.   Aah, I love this time of year.  But with an impending candy/turkey overload, my waist size is already getting bigger. 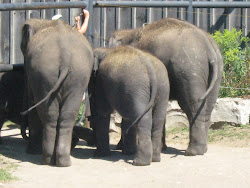 Jim Reeve
Hi everyone. My name is Jim and I've been with my wife Shannon since highschool. Together we have one son, Jacob, who was diagnosed with Asperger's in 2010

CHECK OUT SOME OF MY BEST POSTS